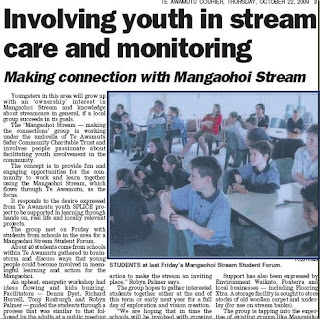 An article was published in the Te Awamutu Courier 22 - 10 -2009, reporting on the successful student forum, which was held the previous week.

Youngsters in this area will grow up
with an ‘ownership’ interest in
Mangaohoi Stream and knowledge
about streamcare in general, if a local
group succeeds in its goals.
The ‘Mangaohoi Stream — making
the connections’ group is working
under the umbrella of Te Awamutu
Safer Community Charitable Trust and
involves people passionate about
facilitating youth involvement in the
community.
The concept is to provide fun and
engaging opportunities for the community
to work and learn together
using the Mangaohoi Stream, which
flows through Te Awamutu, as the
focus.
It responds to the desire expressed
from Te Awamutu youth SPLICE project
to be supported in learning through
hands on, real life and locally relevant
projects.
The group met on Friday with
students from schools in the area for a
Mangaohoi Stream Student Forum.
About 40 students come from schools
within Te Awamutu gathered to brainstorm
and discuss ways that young
people could become involved in meaningful
learning and action for the
Mangaohoi.
An upbeat, energetic workshop had
ideas flowing and kids buzzing.
Facilitators — Donna Dyet (Learning Facilitator), Richard
Hurrell (Safer Communities Trust), Tony Roxburgh (Waipa Distric Council) and Robyn
Irving (Enviro Schools) —g uided the students through a
process that was similar to that followed
by the adults at a public meeting
three weeks ago. All these ideas will
now be posted on the blog on www.te
awamutu online.
‘‘The clear message from the
students was that they want to be
involved in collective hands-on fun and
action to make the stream an inviting
place for community use,’’ Robyn Irving says.

The group hopes to gather interested
students together early next year for a full
day of exploration and vision creation to
work towards creating a Strategic Plan
for ongoing development.
‘‘We are hoping that in time the
schools will be involved with growing
and maintaining plants for the stream
banks, water testing and water flow
monitoring,’’ Richard Hurrell says.
Friday’s meeting followed a well
supported public meeting the previous
month.
Support has also been expressed by
Environment Waikato, Fonterra, student activity
groups and the local business community — including Flooring
Xtra. A storage facility is sought to store
stocks of old woollen carpet and underlay
(for use on stream banks).
The group hopes to also tap into the expertise
of existing groups like Mangapiko
Stream Care Group and the Parks and
Reserves Committee.
For more information phone Mr
Hurrell on 021 210 8030 or email Mrs
Irving: lifestyleplantations@ihug.co.nz
or Mrs Dyet: dyet@xtra.co.nz .
Posted by Donnady at 2:11 PM 1 comment:

Below is a summary of all ideas offered as a response to this question - at the recent Community Meeting . Please feel free to develop these further and add your own ideas and suggestions below (click on the "comment" tab.)

Pull the community together , schools seen as a visible and viable part of the community, install pride ,children develop pride in their community by being involved in “doing” some of it, taking ownership, providing more recreation options, Stream will look “prettier”, bringing back the wildlife, increased farm productivity, increased pride in Te Awamutu’s history, providing possible work options for the future, keeping the kids busy, providing educational opportunities, recreational benefits, improved water quality, biodiversity, food supplies, schools and community involvement creates greater community involvement, application of theory, providing authentic learning experiences and a sense of achievement to kids, gives individuals and groups something to aim for – a focus, has tourism and economic benefits, develops unity and a sense of belonging, pride for the community ie. People want to associate with TA –may be continued through future generations, life-long learning practiced, key competencies developed and practiced with kids, community work good option for family time, great publicity for the town – a place where our kids learning matters , a place where we value and actively develop responsibility and citizenship in our young people.

2. What are the challenges and obstacles ?

Sense of Politically correct safety/danger issues re: using the stream, creating “safe zone” around stream/park/ bridges, engaging Local Bodies (physical and corporate),
establishing understanding- knowledge of what has been lost with the Stream, working within a crowded curriculum in schools –finding time for schools to participate effectively, (could senior students earn NCEA credites ?), turning words into actions, reaching agreement SOON, engaging children, public apathy, getting “buy in” from the community, getting funding, knowledge or lack of about “The Stream”, staying committed to the project, maintaining work done within the project, management, establishing a good vision – good presentation, understandable and achievable plan, establishing that this is really important for our community.

3. What skills might our kids need/ develop within the project ?

Appreciation of the environment, understanding of appropriate flora and fauna, the history of the Mangaohoi Stream, reclaim past recreational activities eg eeling, helping children to become recognized as participants in our community, appreciation of the cultural –historical and present significance of the Stream, develop potentional for recreational water activities, time management, self confidence, discipline, accessing expert advice, developing a passion for the environment /sustainability, discussion skills, working with others - compromise, fitting in with other plans the town has, innovation and enterprise, heritage – cultural understanding, teamwork, communication, knowledge of how local government works, research skills, problem solving skills, practical skills eg. physical effort.

SPLICE - Supporting Personalised Learning in Interactive Community Environments. SPLICE is a local project that has achieved much success. Local school students (Year 6- 13) have worked hard to inform their community about changes in schooling - in particular the developing needs of 21st Century learners to engage in authentic learning activities within their communities. The project was funded with a grant from Microsoft Partners in Learning.

As a result of some of this work students collaborated on several videos. This video was made for the local community (and shown at the Mangaohoi Stream Community Meeting)- to explain why students need more authentic learning experiences - working with community members and experts in their fields, as effective 'Partners in Learning'...

It is an invitation from our local children - the College Kapahaka students composed the lyrics and actions to the song.
Partners in Learning - Approx 6 mins.

Video hosted by TATV
Posted by Donnady at 4:59 AM No comments:

Mangaohoi Stream Project
View more presentations from donnadye.
Posted by Donnady at 4:18 AM No comments:

Where are our visitors from ?